Through non-fiction and fiction storytelling, Stories Beyond envisions to tell restorative and transformative narratives of people and communities. Beyond the single story.

Stories Beyond is devoted to original and untold narratives delivered in the most appropriate format, exploring different media platforms and deliveries–from written text to documentary films, photo essays, interactive documentaries, audio stories, and other cross-media/intermedia products. We are committed to putting out stories that are new and diverse.

We continuously explore ways to tell stories effectively and efficiently to inspire people to move and think, to find solutions to problems, to achieve a sense of social justice, to dialogue, to become better at interacting with one another and the environment they live in. 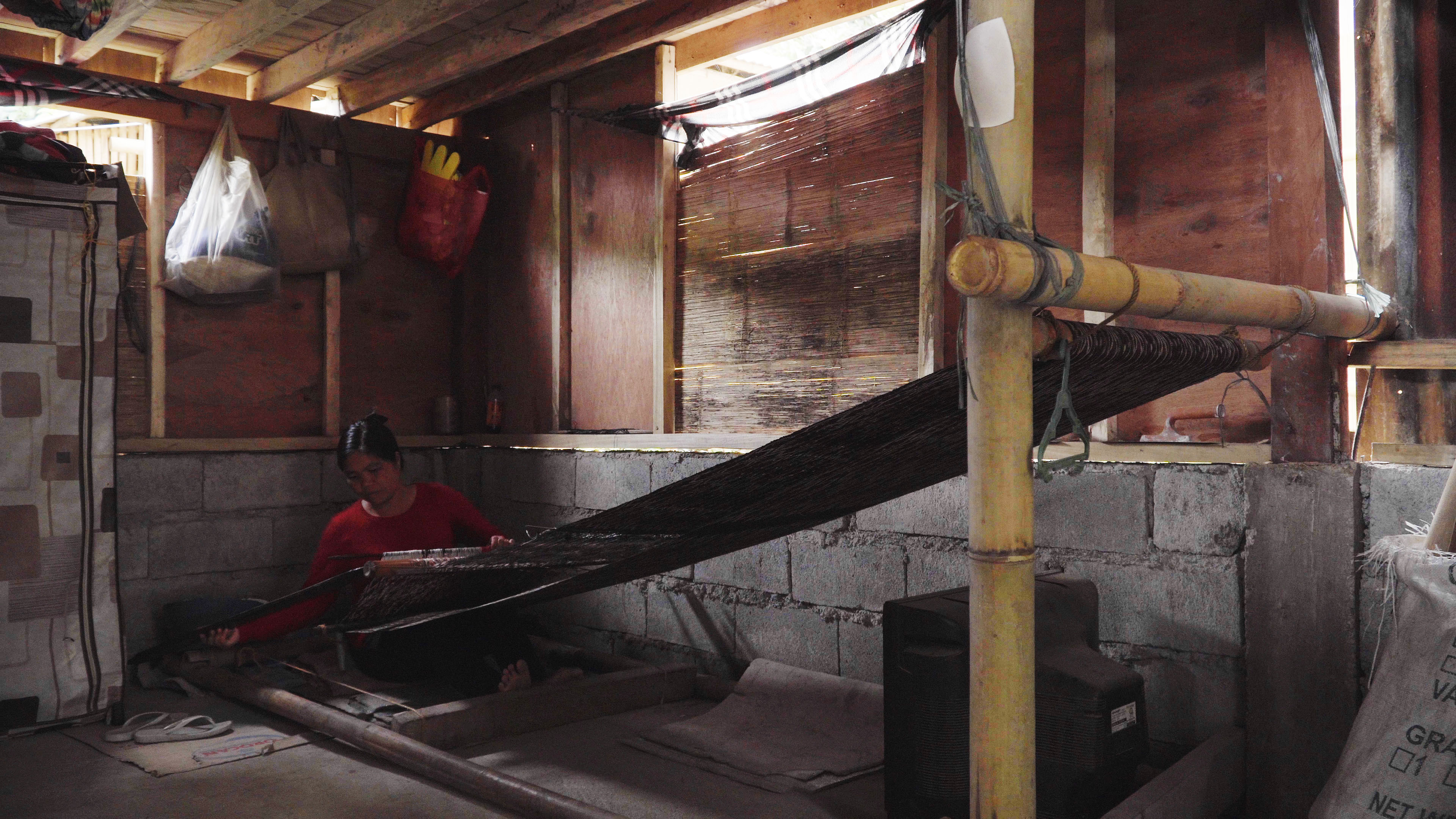 Like the shuttle that in her hands deftly flies across her loom, Jenita Eko, a T’boli woman leader, has to weave her way through the weft and warp of daily living amid the threats to her and her community’s survival during the pandemic and the government’s anti-insurgency program. 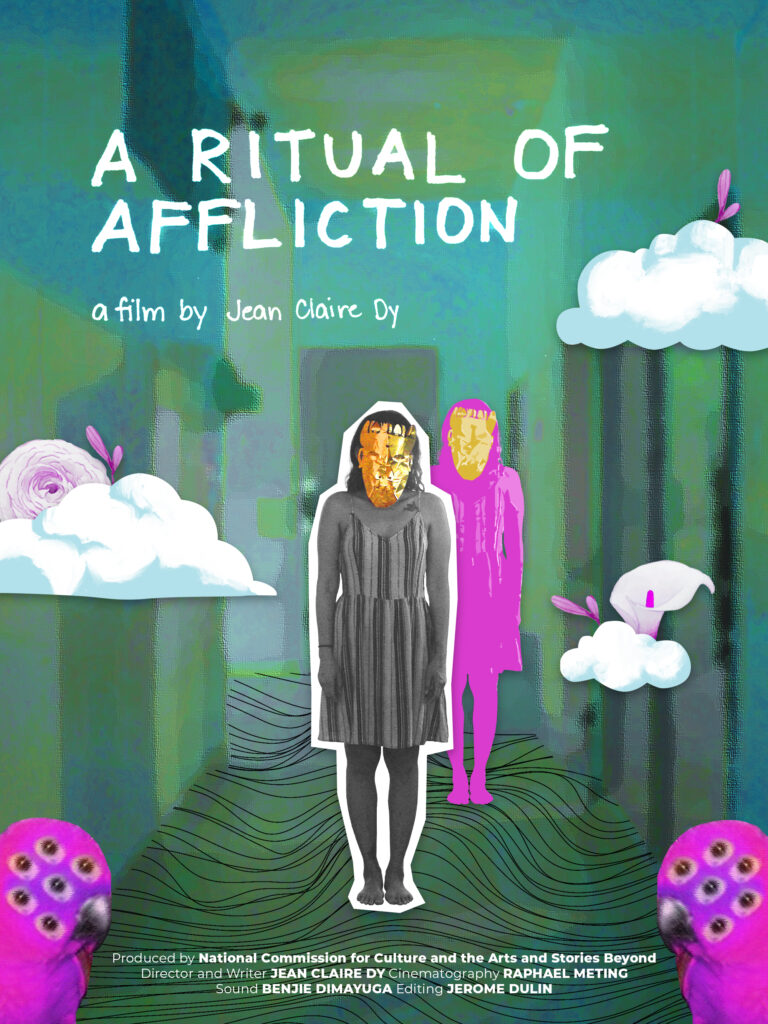 This essay film explores the notion of liminality as a phase artists on standby lare caught in the betwixt and between during the pandemic. It plays with what anthropologist Victor Turner in his discussion on liminality that there are 4 degrees of liminal and one of this is he calls “ritual of affliction” during the a time of massive disease in a community. Among the 14th century Mindanawons, wearing a gold mask during rituals of disease and death was practiced.

A HOUSE IN PIECES TRAILER

Available through VOD at https://vimeo.com/ondemand/ahouseinpieces

Documentary: A HOUSE IN PIECES 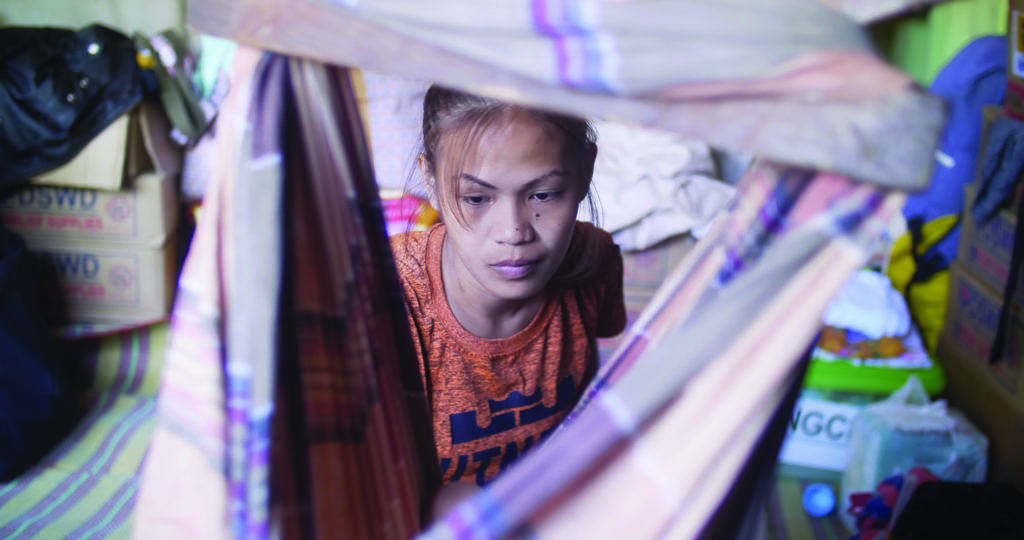 A war between the government and ISIS-affiliated jihadists in Marawi, Philippines, forced hundreds of thousands to flee from their homes. After the war, residents struggle to rebuild their homes and lives in a deformed city.

Displaced couple Yusop and Farhanna and their children yearn for freedom, income, and comfort after returning to their city. But even returning to normalcy is already a struggle. Nancy, a once-wealthy woman, has to cope with her loss of home in an evacuation shelter where she will have to remain for years. An anonymous driver with striking insights shuttles back and forth between places and stories around a city which will never be the same again.

The film accompanies its protagonists for two years through fear, worry, and hope, towards a new beginning on their long journey.

Long Form Feature: THE MADRASAH AS INTERVENTION VS VIOLENT EXTREMISM

This long-form piece was published on www.mindanews.com. Written by Stories Beyond’s Jean Claire Dy after the first part of shooting House in Pieces in Iligan City. Read the entire article HERE. 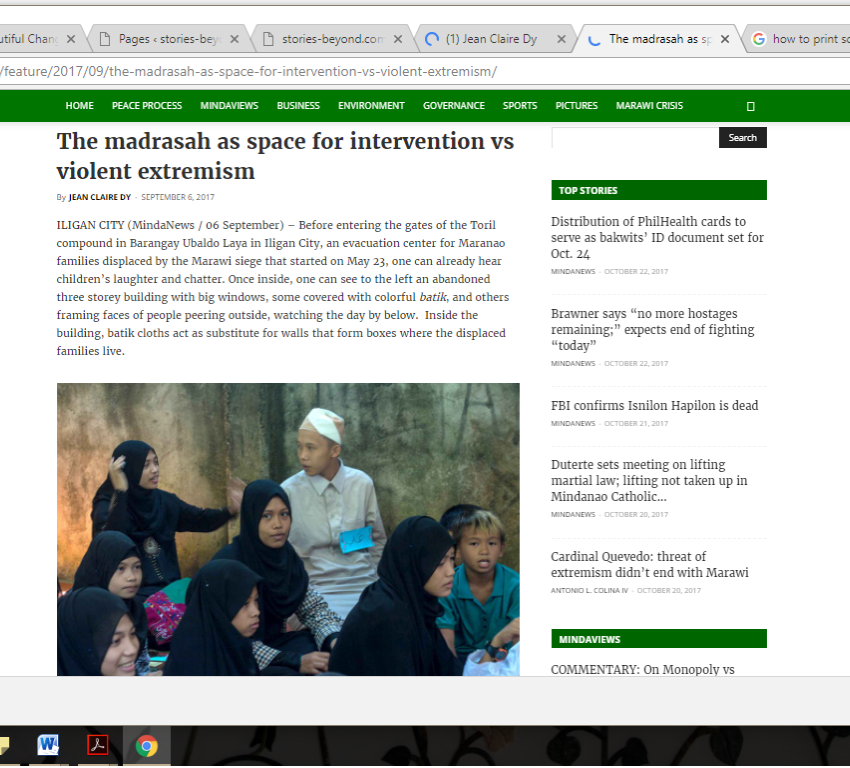 Documentary: A MEMORY OF EMPIRE 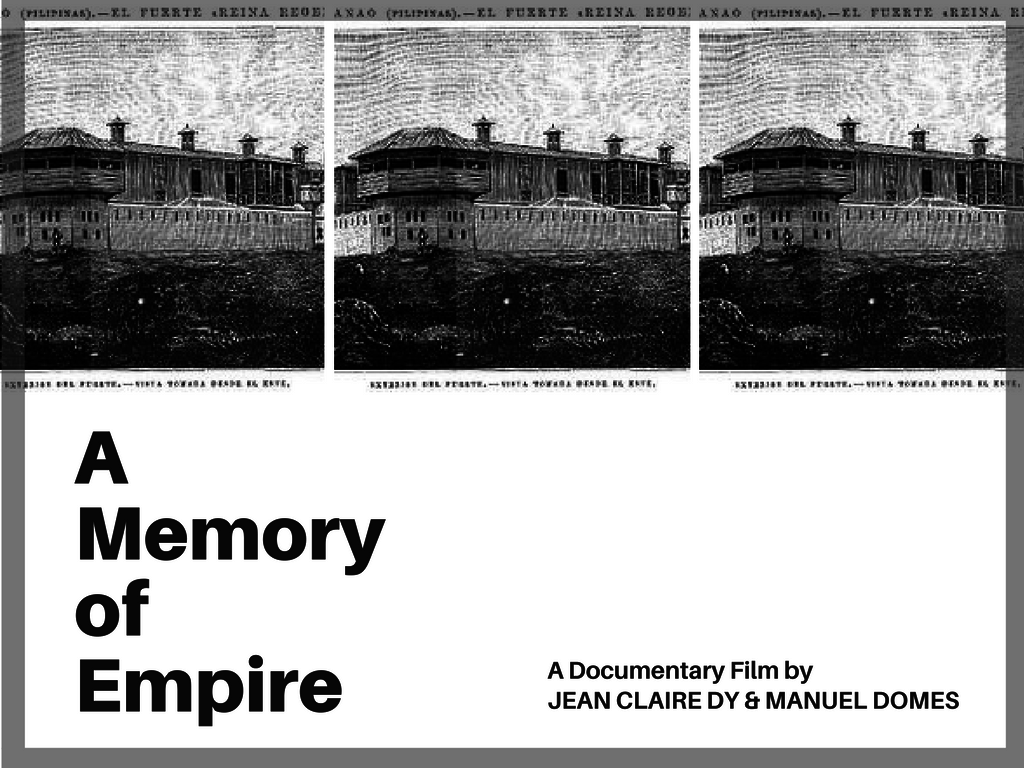 Using the life story of Norma Limoso “Dipearli”, a former teacher from Iloilo who is now in her 70s, as its backbone, A Memory of Empire unravels the complex and complicated history of the Mindanao conflict through a personal narrative.  In 1960, Norma became part of the state-sponsored resettlement from Panay towards Mindanao, the then Muslim-dominated “land of promise” in the Southern Philippines. She and her companions settled in the town Columbio in the former Empire Province of Cotabato, where traditional Muslim clans ruled over social and political life. At 23, Ms. Limoso married Datu “Boy” Dilangalen, a Muslim royal leader, without the approval of her Christian relatives in a Muslim rite deep in the mountains. Her husband would, later on, become influential in the founding of the Moro National Liberation Front, the first Muslim armed group in open rebellion against the Philippine government.

The influx of Christian settlers, like Norma Limoso, was one of the key reasons for the rebels to take up arms. Ilonggos from Panay in particular have been associated with land grabbing and violence perpetrated against Muslims by vigilante groups such as the ilaga.  At the outbreak of the war, believing her husband died after an encounter, Norma gave birth to her first daughter back in her hometown Iloilo, where she later re-married. Years after, a knock on her door brought the Memory of Empire back into her life. 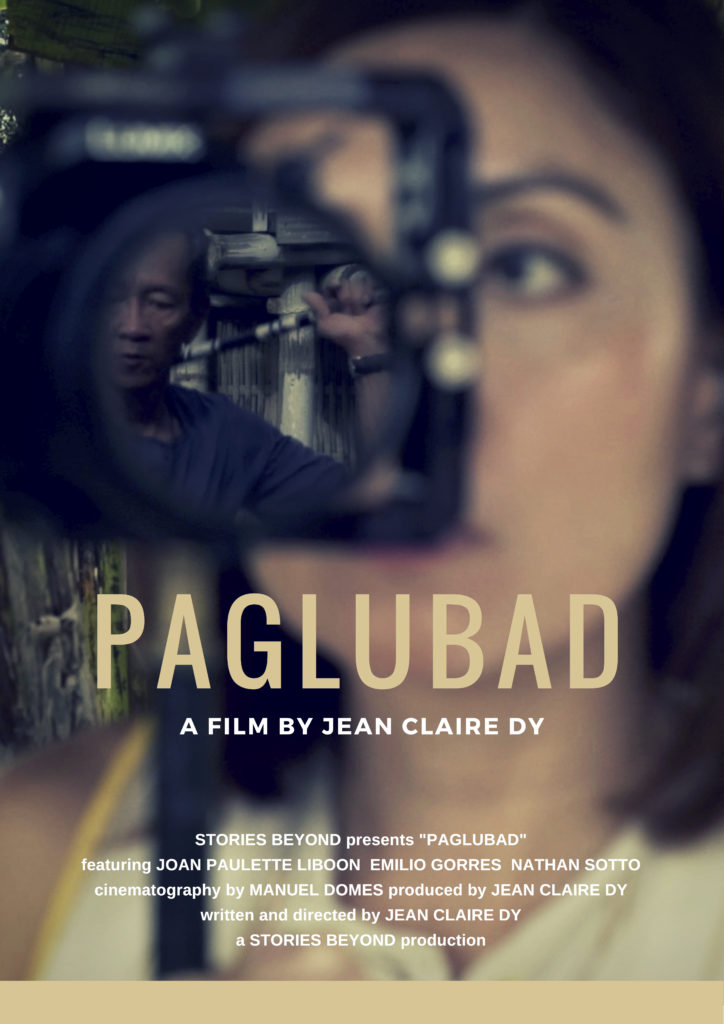 Ligaya, a filmmaker, stays with her uncle Primo in Iloilo, to finish a documentary film about her roots. Motivated by the need to understand why her family in Cotabato resists her plan to marry her Muslim boyfriend Malik, Ligaya is determined to find answers from her uncle. Malik is an orphan whose parents were killed in a fire during one of the massacres perpetrated by the Christian militia known as the ilaga during the war in the 1970s in Central Mindanao.

Ligaya seeks to find answers from her uncle about his past life in Mindanao during the tumultuous 1970s. Armed with her camera, she doggedly observes her uncle doing his rituals, practicing arnis martial art movements, persistently pushing him to answer the questions about the past. Primo, on the other hand, resists Ligaya’s questions. When finally Primo agrees to a video-recorded interview, Ligaya is faced with the weight of the wartime secret she unwittingly unravels.

Written and Directed by Jean Claire Dy, Cinematography and editing by Manuel Domes, Musical Score by John Diagoras of The Good Friday Experiment 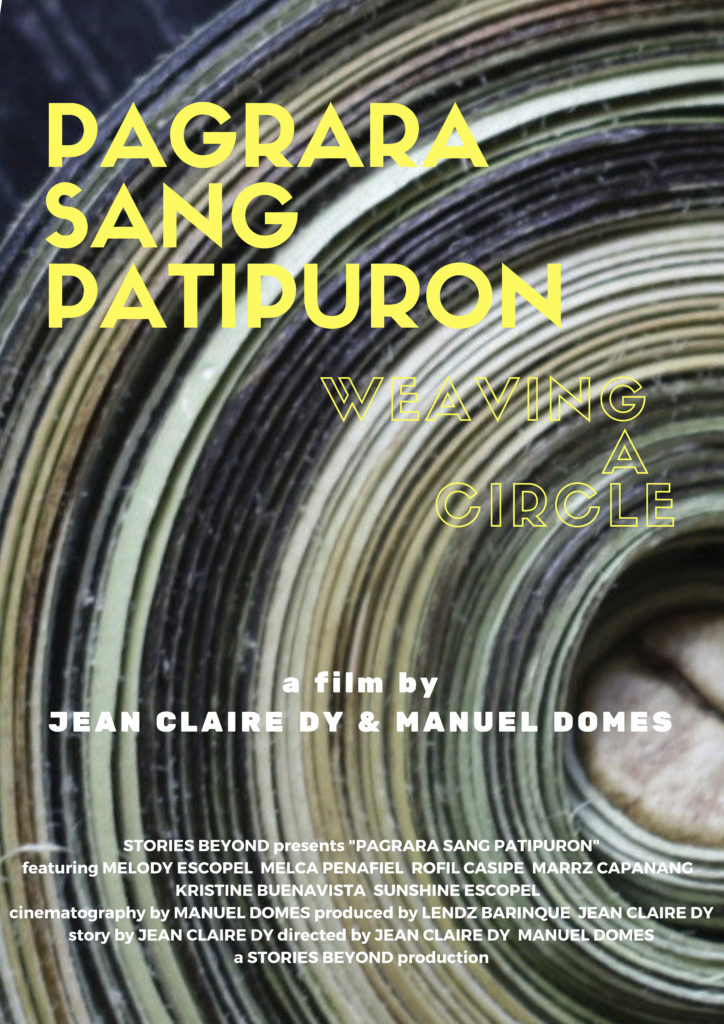 Directors: Jean Claire Dy, Manuel Domes
Producer: Lendz Barinuque, Jean Claire Dy
Screener: https://vimeo.com/193227812
Synopsis:
Pagrara Sang Patipuron follows a group of indigenous Aeta women weaving artists in Nagpana, a sitio up in the mountains of Barotac Viejo, Iloilo. The film explores their artistic processes and products, reflecting negotiations between tradition and modernity. The Nagpana community is home to weaving artists that traditionally make crafts (purses and bags) that answer to a saturated market of woven crafts. This circle of women weaving artists is going beyond the products the Aeta are known for, by weaving jewelry with designs inspired by their environment and the people they live with. For these women, to weave from the center, to weave a circle, is to weave a life confronting realities of lack and insecurities brought about by poverty. With the help of two young artist entrepreneurs in the community, the women were empowered to explore their artistic imagination and extend the limits of their design process in the hope of transcending their present realities. The Aeta are considered the first inhabitants of the Philippine archipelago, but they are also one of the most marginalized indigenous peoples in the country.

Nominated in the documentary category of the 2017 Sinag Maynila Film Festival.

“The media has a profound impact on the way we see the world, how we interpret news events and the way we respond to these events. This is especially true in the wake of natural disasters, shootings, bombings, and other tragedies.

The media tells us what happened, how many homes were destroyed, who was killed or injured — all the facts that keep us informed. These stories are important, but they’re often confined to tragedy, despair, and loss.”

Stories Beyond believes that we need restorative narratives to mobilize people and communities in ways that traditional “IF IT BLEEDS, IT LEADS” news stories can’t. There must be better ways to move people rather than incite anger, hate, frustration, and most of all, fear.

Meet the storytellers who are working to make that happen. 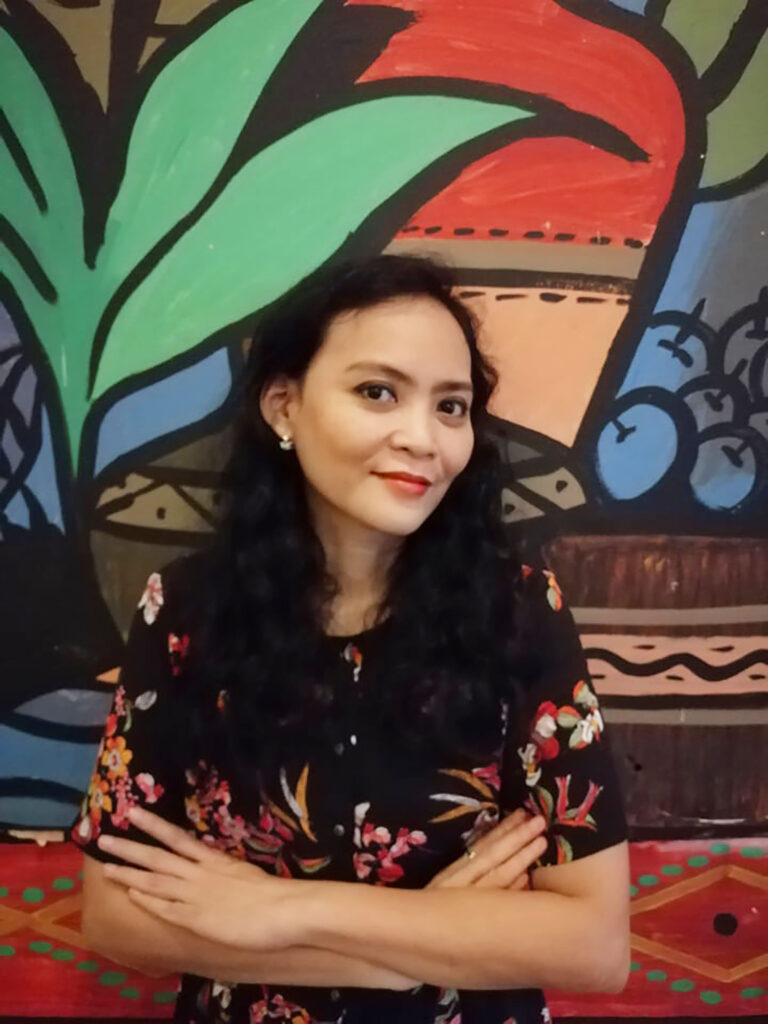 Founder of Stories Beyond, Jean Claire Dy is a third-generation Filipino-Chinese filmmaker, writer, media artist, and educator. She is currently taking a PhD in Fine Arts and Music with a focus on filmmaking at the Victorian College of Arts of the University of Melbourne.

Claire is currently an Assistant Professor  of the Communication and Media Studies program of the University of the Philippines Visayas.  In the past, she headed MindaNews TV, the now-defunct convergence media component of MindaNews where she also worked as a correspondent and travel editor. She also taught in the Creative Writing and Media Arts programs of the University of the Philippines Mindanao and recently was a Visiting Lecturer at the Convergent Media Lab of the Cheung Kong School of Journalism and Communications in the People’s Republic of China.

Her short narrative film Paglubad was screened at the Sharjah Film Platform in 2019.  Pagrara Sang Patipuron, a short documentary she directed with co-director Manuel Domes, was nominated in the 2017 Sinag Maynila Film Festival for Best Documentary. Her latest documentary film co-directed with Manuel Domes titled A House in Pieces won the Golden Hercules Award at the Kasseler Dokfest. It was recently nominated for the Gawad Urian Best Documentary Film in 2021. 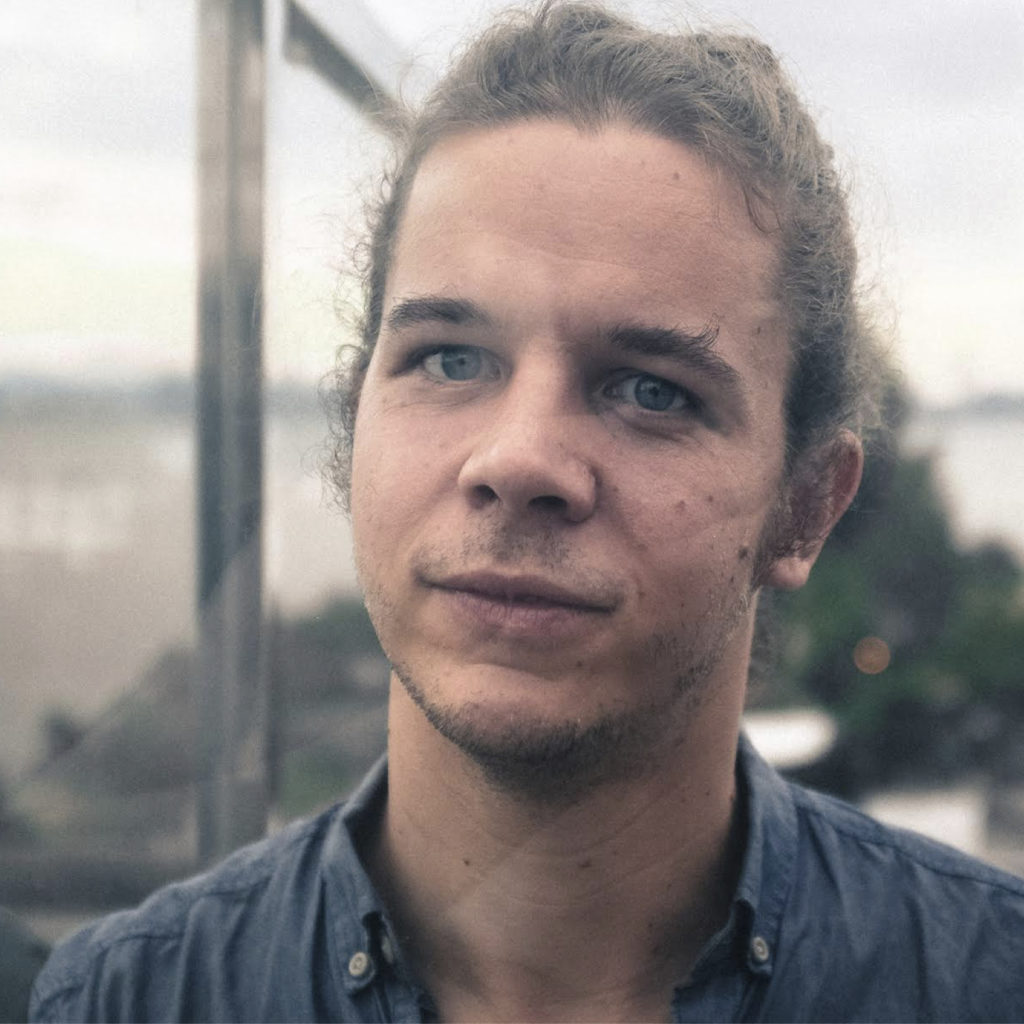 Manuel Domes is a filmmaker from Germany, standing on a second leg in the Philippines. Before embarking fully on his second career as a documentary filmmaker in 2017, Manuel has worked on conflict transformation projects in Mindanao, Philippines for different international organizations. With German NGO forumZFD, he produced a collective film platform that supported dialogue between Mindanao and the National Capital Region through films.

As a filmmaker, Manuel is interested in the intersections of conflict, identity, and migration. As a consultant, he helps NGOs to use film in their advocacies and monitoring. Manuel received a MA in International Relations from Free University Berlin and a BA in Political Science from the University of Bremen. Manuel also completed a professional certification as a peace and conflict consultant, a diploma in Photojournalism from Ateneo de Manila University, and was enrolled in the MA in Media Studies (Film) at the University of the Philippines. 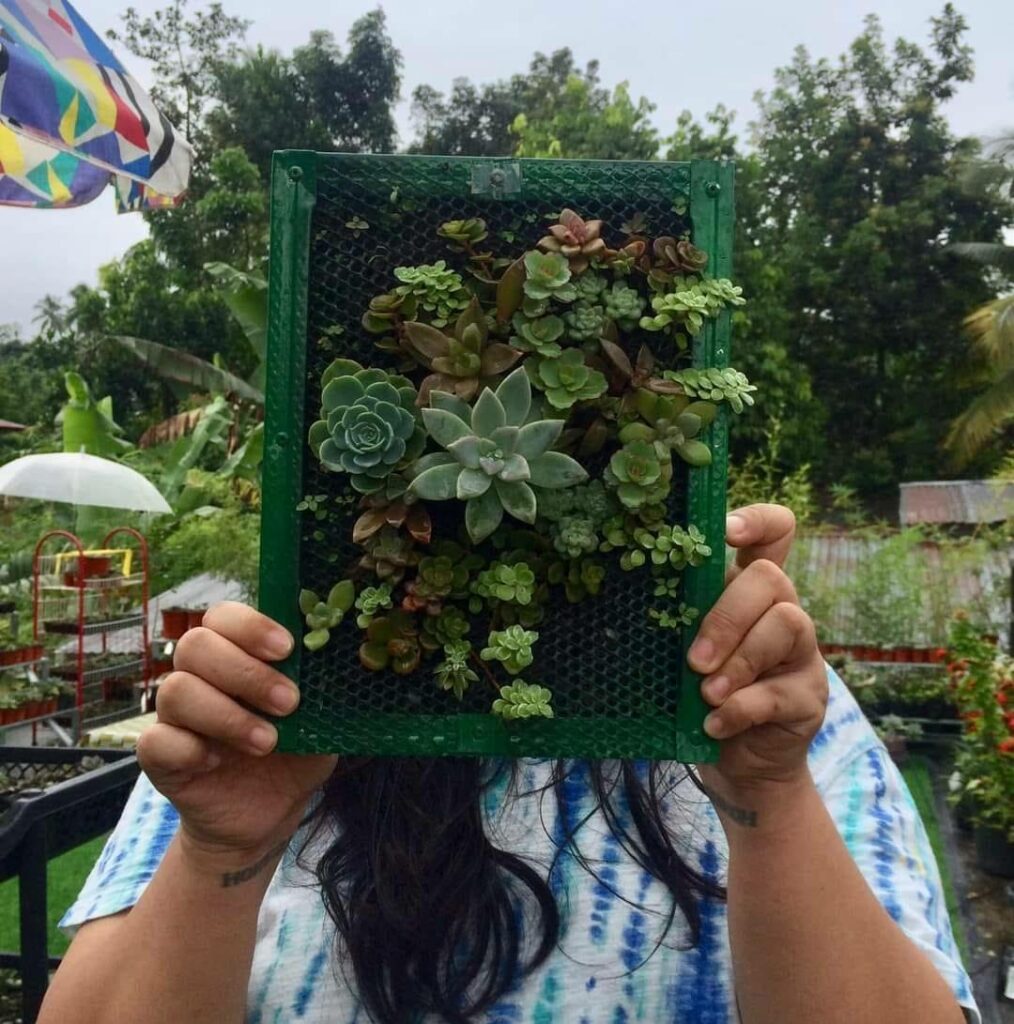 Angely Pamila Chi is a production manager, producer, artist, and curator from Davao City, Philppines. She is currently the curator and programmer of two festivals: Ngilngil Fantastic Film Festival, and Pasalidahay. She has worked as a producer to films such as Baboy Halas which won awards in the international circuit. Her performance and video artworks have been exhibited in various exhibitions in the Philippines and abroad. She is also a sound artist who has collaborated with Japanese sound artists in various programs. Her writings have been published in several publications through the years.
Currently, she is working as production manager and line producer for documentary projects directed by Jean Claire Dy for Stories Beyond. 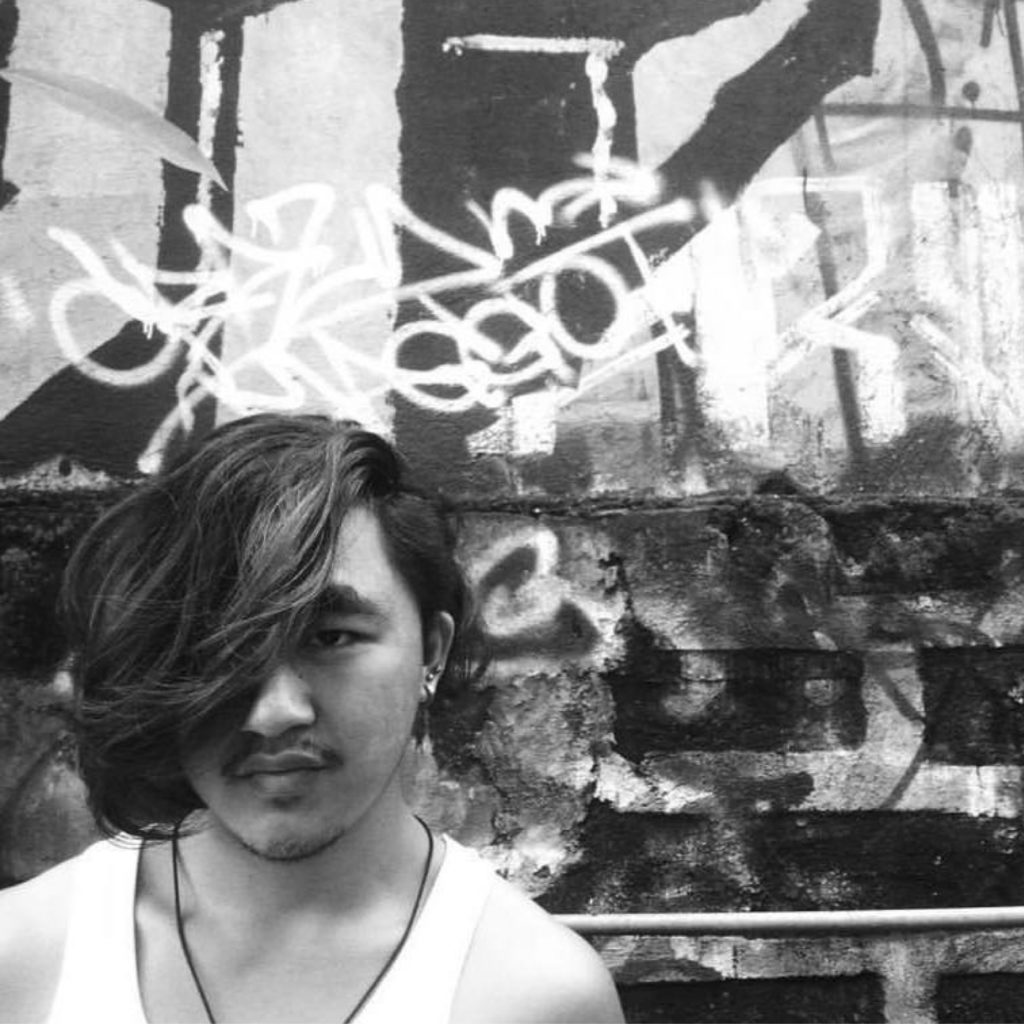 Lendz Barinque is a filmmaker and producer who has helped produce several feature films and documentaries distributed nationwide and screened in international film festivals. He received a Diploma in Digital Filmmaking at the International Academy for Film and Television. He holds a Bachelors degree in Creative Writing at Silliman University and is currently finishing a collection of stories for an upcoming publication. 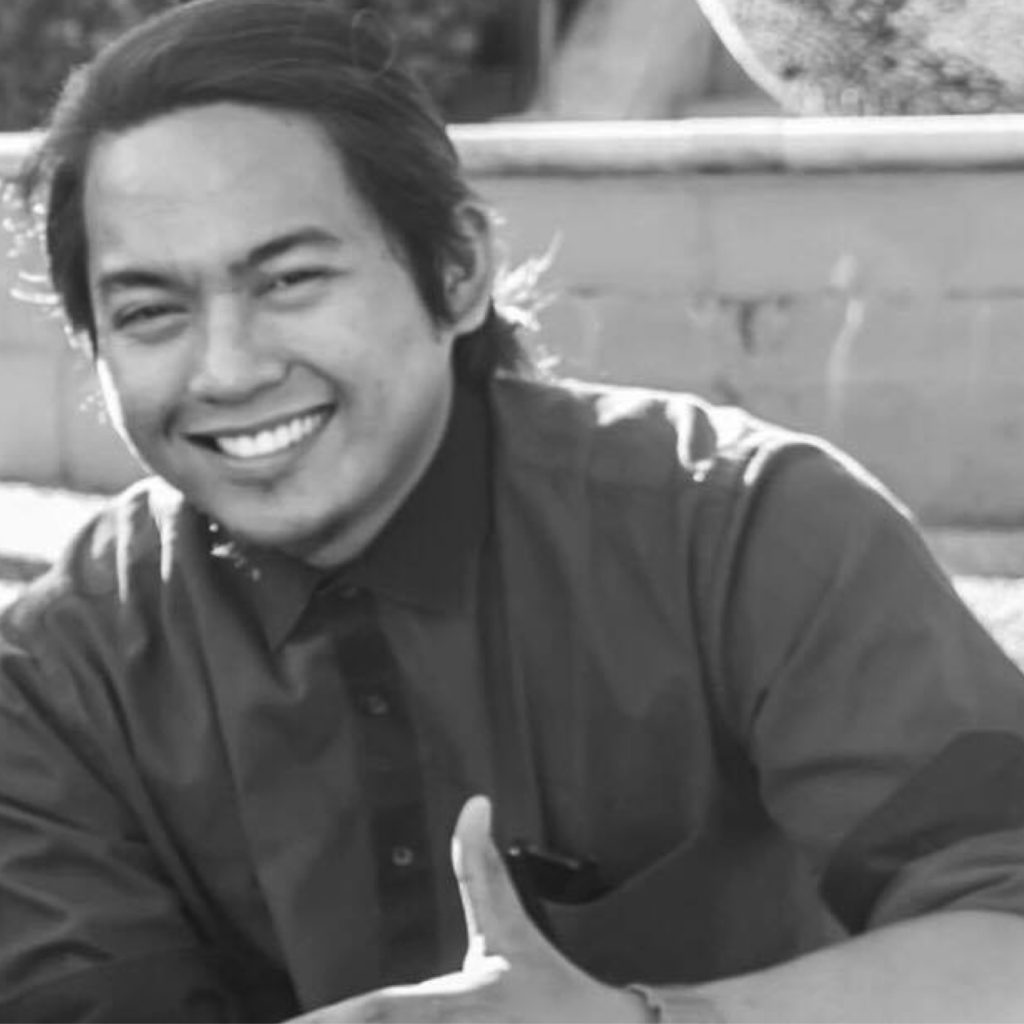 Marius Angelo Monsanto is a graphics designer and animator based in  Brisbane, Australia. Born and raised in Davao City, Philippines, Marius holds a Bachelor of Arts degree in Creative Writing from the University of the Philippines Mindanao. He is also a published writer of poetry and creative nonfiction. Currently, he is pursuing an Associate Degree in Design (Graphic Design) at the SAE Creative Media Institute in Brisbane. 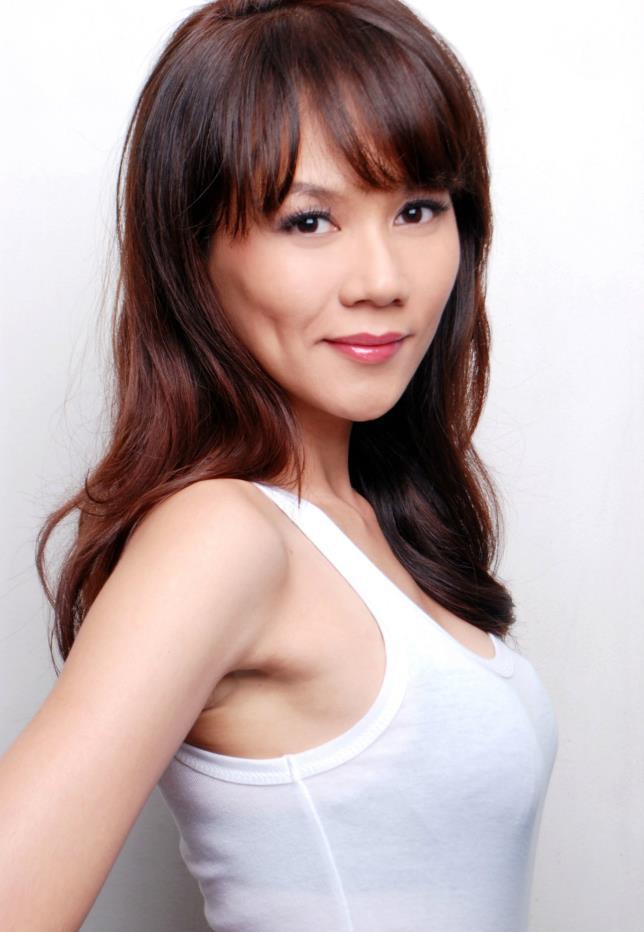 Roan Ng is a professional actress, a storyteller, and an advocate for veganism and compassionate choices. She has acted in several short films, and feature-length films screened in the Philippines and in international film festivals. She currently also hosts events organized in the country. In her free time, she writes poetry and prose.

Stories Beyond’s founder Jean Claire Dy has recently been accepted as one of the participants in the Connecting Stories Program of the Scottish Documentary Institute.  She is the only Filipina among the 13 chosen participants from Asia and the Middle East. During the 9-month program, she will be developing her second feature-length documentary tentatively titled …

END_OF_DOCUMENT_TOKEN_TO_BE_REPLACED

A House in Pieces recently screened at Kasseler Dokfest in Germany on November 20-27, 2020. The film was awarded the Golden Hercules award, one of the top prizes given by the festival. Here’s a news article about the news: https://www.mindanews.com/top-stories/2020/11/documentary-on-marawi-wins-golden-hercules-award-in-germanys-kasseler-dokfest/

A House in Pieces will have its Philippine Premiere this coming October 23-29, 2020 at the Daang Dokyu film festival. It will be streamed online for free during the above dates. The Stories Beyond team is excited for the screening as it will be a good opportunity for Filipinos to join the conversation about the …

END_OF_DOCUMENT_TOKEN_TO_BE_REPLACED

Comments or questions are welcome.