Stories Beyond’s founder Jean Claire Dy has recently been accepted as one of the participants in the Connecting Stories Program of the Scottish Documentary Institute.  She is the only Filipina among the 13 chosen participants from Asia and the Middle East.

During the 9-month program, she will be developing her second feature-length documentary tentatively titled “Behind the Fields” which she will again be co-directing with long-time collaborator, German filmmaker Manuel Domes (one of Stories Beyond’s storytellers).

Read the rest of the announcement here: https://www.scottishdocinstitute.com/2021/05/04/connecting-stories-participants-announced/

A House in Pieces recently screened at Kasseler Dokfest in Germany on November 20-27, 2020. The film was awarded the Golden Hercules award, one of the top prizes given by the festival.

Here’s a news article about the news: https://www.mindanews.com/top-stories/2020/11/documentary-on-marawi-wins-golden-hercules-award-in-germanys-kasseler-dokfest/

A House in Pieces will have its Philippine Premiere this coming October 23-29, 2020 at the Daang Dokyu film festival. It will be streamed online for free during the above dates.

The Stories Beyond team is excited for the screening as it will be a good opportunity for Filipinos to join the conversation about the aftermath in the Marawi siege and how most Maranaos, who are the victims of the war, are still trying to rebuild their lives, some of them unable to return to their deformed city.

Please watch the film at https://daangdokyu.ph/

The latest documentary produced by Stories Beyond is A House in Pieces, and is directed by our storytellers Jean Claire Dy and Manuel Domes. The film will have its World Premiere in September 20 and 24 at the 12th DMZ International Documentary Film Festival in South Korea. The film is competing in the best Asian film competion.

Paglubad or Unravel a short film produced by Stories Beyond has been selected out of over 400 applicants for this year’s Sharjah Film Platform(SFP), the annual programme organised by Sharjah Art Foundation in the City of Sharjah, United Arab Emirates.

The film was screened at Mirage City Cinema Al Mureijah Square and was presented as its international premiere along with other 120 competing films from over 40 countries. 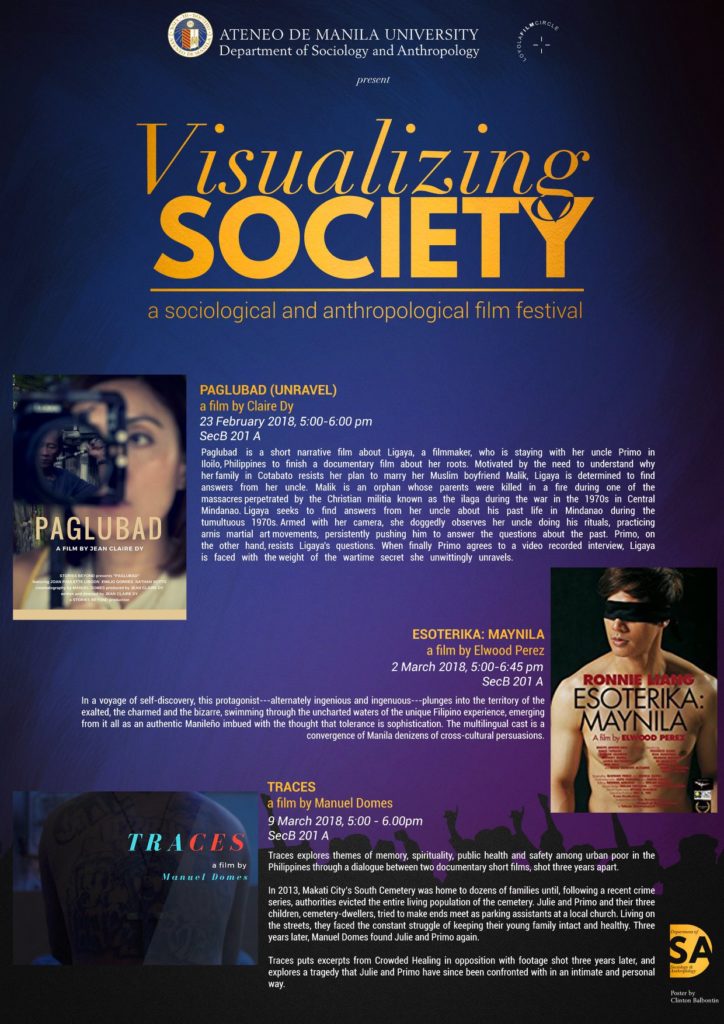 Friends in Manila, Jean Claire Dy ‘s Paglubad and Manuel Domes’s Traces will screen at Ateneo de Manila this Friday and two weeks after. Check the poster for details

Paglubad (Unravel) recently screened in Berlin during Jean Claire Dy’s artist talk at Takt AIR Academy in Neue Hochstrasse.  The screening had a good turn out as audience range from Filipino migrants, scholars, German development workers, and other artists from different countries.

There was a short discussion after the screening where questions generated interesting conversations on dealing with the trauma of the past on a different scale.

Paglubad will also be screened in Cologne this coming March.

Stories Beyond recently had a successful screening of its short narrative film “Paglubad” (Unravel) at the FDCP Cinematheque Iloilo last October 20, 2017.

The talkback after the screening generated a lively discussion on history, memory-making, and dealing with the past, especially ones that are complex and complicated. The Ilonggo audience also raved about the screenplay and the poetic visuals provided by the cinematography that left them teary-eyed and speech less.

There is enthusiasm in further screening the film in other parts of Panay Island, a development that Stories Beyond’s storytellers found encouraging as a way to push forward its mission to engage communities about difficult topics that are largely forgotten histories of conflict that connect the Panay and Mindanao islands.

Stories Beyond’s “Paglubad” (Unravel), a short narrative film written and directed by Jean Claire Dy, and cinematoraphy and editing by Manuel Domes, was recently chosen as part of the Mindanao films competition category of the Salamindanaw Asian Film Festival to be held on Novemeber 12-December 1, 2017.

Salamindanaw is the only international film festival in southern Philippines which aims to raise awareness and promote international cinema with emphasis on strengthening the cultural ties between Mindanao and its Asian neighbors, support the nascent film movement in the region, as well as engage the public in both popular and critical discourse on art and cinema and their transformative power to shape ideas about society, and encouraging cultural diversity and the plurality of creative expressions.

This will be the first time this independent short film will be screened in Iloilo. As it was shot in Iloilo City with an Ilonggo cast and crew, it is fitting to screen it here on a 1 night only event.

Ticket price: 75 php
Proceeds will go to part of the completion of our documentary film on the Marawi Siege and the rent for the venue.

About the film: Ligaya, a filmmaker, stays with her uncle Primo in Iloilo to finish a documentary film about her roots. Her need to understand why her family in Cotabato resists her plan to marry a Muslim motivates her to seek answers from her uncle about his past life in Mindanao during the tumultuous 1970s. Unwittingly, she unravels a wartime secret.

Impetus:
On a more larger social impact, there has been little outreach and engagement with Visayans to discuss the root causes and histories of conflict in Mindanao, despite the role some Ilonggo settlers from Panay island played in the conflict. This lack of knowledge and prevailing prejudices against Muslims in the Philippine are major stumbling blocks for a lasting peace that addresses historical injustices.

Paglubad (Unravel), a short film written and directed by Jean Claire Dy and cinematography and editing by Manuel Domes was envisioned as a platform for dialogue around this largely forgotten part of Philippine history. In the experience of peace advocates, artistic approaches such as films are soft, yet important, venues for dialogue about sensitive issues charged with historical tensions.

This has been our dream that through Stories Beyond we can possibly make such dialogue happen through filmmaking. And it was and will always be the reason why we moved here early this year. Due to unforeseen circumstances, one of us have to take a short break.